In Home Training For Horses

One of the very first lessons I learned about training horses was a bit unconventional, but one of the most valuable… A horse is not really trained until you can do what you taught them in the barn or arena in their ‘homes’. (eg. the pasture, the stall etc.)

This seems a bit weird, but when you think about it, it can make a lot of sense. At the barn where I learned to train horses (I volunteered there weekly), the horses would all get brushed daily, to save time we brought the brushes to the horses in their paddocks and brushed each horse loose.

This was second nature to me when I purchased my own horses years later, Mac came from this same barn, and was accustomed to the daily brushing ritual. Speedy however was not, he was used to humans catching him, putting him on cross ties, then brushing him. The first time I tried to brush him loose (not even thinking it would be a big deal) he spooked and would not let me go near him.

It took me a couple of weeks of brushing with the halter on him, while he ate before he would stand still without it. Weird, or what? (The third horse I bought, Dash, did the same thing)

The second part of this lesson was about respect in the pasture or paddock, I learned that just because your horse listens well in the arena, does not mean you will have the same respect from them in the pasture. The owner of the barn where I volunteered would have us go and work the young horses in their pastures to maintain that no matter the location the rules still apply, this made them easier to catch, handle and just plain be around while they where in the pasture.

I have been using this method to train my horses for a long time, and it comes in handy on a daily basis. If my horse is limping, or has snow packed feet I can pick them up right there to investigate. If I am snowed out of the round pen, I can lunge one horse at a time in the paddock while the other remains calm at the other end of the paddock.

Initially this was not the case, when I first tried to lunge Mac in the paddock with Maggie (the 4th horse I have owned) loose she freaked out! She would run around confused and nervous, even know Mac was just trotting around in a little circle calming watching her jump and buck and tear around the perimeter of the lunge circle.

It did not take her long to figure out this was ok, now which ever horse is not being worked may come over and investigate, but will walk back to their place when asked.

A great consequence of this method is that now my horses are starting to work more and more as a team, they stay more in each other’s space (before Mac was very dominant) I can work them at liberty together, brush them when they are loose, and they are just nicer to be around.

Plus I get cute moments like this one, where I was teaching Maggie to come when called, and Mac wanted to come over (He knows the cue better than she does), but that (pictured) is as far as I would let him go. So it turned into a distance ground tying session for him. He was being respectful, but really wanted to come over. 🙂 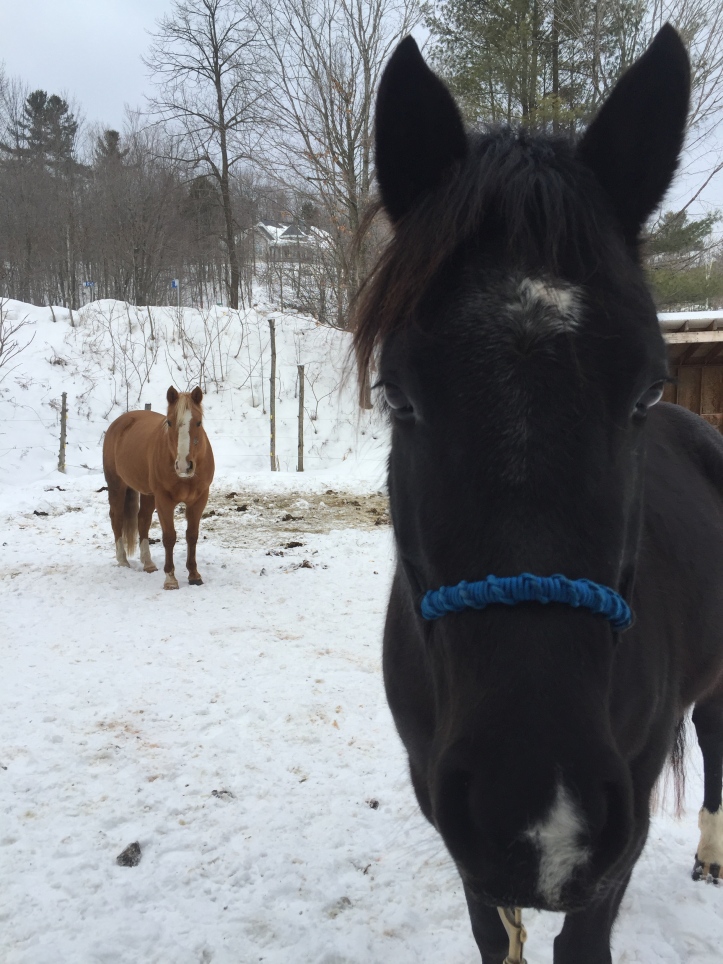