How to Calm The Anxious Eater – Out of Sight, Out of Mind

Mac has alway been very keen on food. I had to be carful when he was young, when I gave him his grain or food to be sure that he knew, unless otherwise stated, it was mine. I made sure to train him that I can claim his food at anytime, and he is not supposed to make a fuss.

He learned this very well, once we introduced more horses to the herd, things changed a little. Since he is only number 3 out of 4, and he eats more food he can get very anxious and agressive towards the other horses trying to come near.

Even know the other two mares live in a separate paddock, Mac would still get very upset if they came over to the fence where he was eating, he would run back and forth pinning his ears and threatening to kick the horse on the other side of the fence.

This also created another problem, he began bolting his food, to avoid the impending danger of the approaching horses. (Who I guess he did’t realize could not get to his food at all)

So pictured is my solution for his feed anxiety. Hiding his view of the other horses. By putting his grain on the other side of the water trough, he had two choices, eating with his head down, or running over and pin his ears at the other horses.

Eventually he chose to just stand and eat, and soon after calmed down and stopped bolting his feed. 🙂 – Out of sight, out of mind 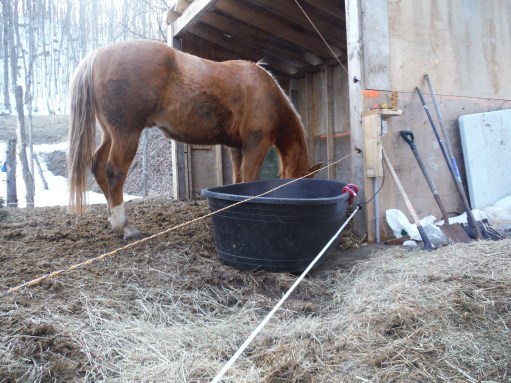